Remodeling – Is it worth it? 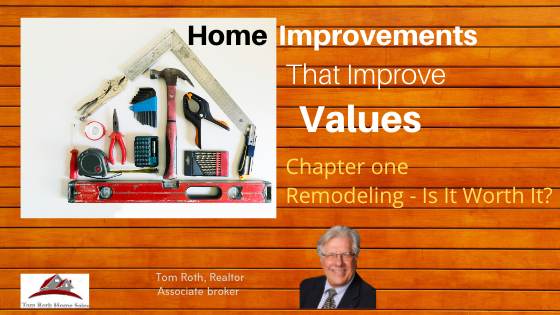 Remodeling – Is it worth it?

Remodeling. You’ve been thinking about it for a while now. That choke point in the kitchen is maddening, the wallpaper in the bathroom is a crime against good taste, and the basement has looked like a dungeon for years.  Not to mention the upgrade to the doors, windows, and th landscaping that have been the subject of si many dinner table discussions.

It crosses your mind that maybe it would be better to just move and leave all the home’s faults for someone else to figure out.  Then again, your job isn’t going to last forever, and you may have to move in five or six years anyway.   Maybe it would just be best to tough it out until then.  After all, no one gets their money back on remodeling projects themselves to save money.

According to the U.S. Census Bureau, from 2009 to 2011 homeowners spent $359 billion on improvements to their homes. That number does not include the expense of routine maintenance normally incurred.  Of the 119 million projects surveyed, 44 million were done by the homeowners themselves, providing a healthy boost to the Big Box Do-It-Yourself (DIY) stores like Home Depot and Lowes.

The trend has only grown since.  The home improvements industry was estimated to be worth well over $600 billion by 2015.  While that number likely includes routine maintenance, that still represents only one year.  This has been driven largely by the effects of the recession which led many people to try to cut costs where they could and take on projects themselves rather than hiring costly contractors.

Even in the current market, with home prices going back up and homes moving off the marke quickly in many places, remodeling can still be a wise decision  The improvements may help set your home apart from the pack if and when you choose to sell.  Or you may find that while your home will already sel quickly and for a good price, you still can’t quite afford the upgrade home you want, and it would help both your current standard of living and the future resale value to improve the property.

It makes sense that if your home is increasing in value, the values of the homes you are looking at will also be rising; your are not alone in deciding to remodel.  However, then comes the hard part – deciding what to do and how much to spend.  There are myriad factors to consider.  How long do you plan on staying in the house? What is your budget? What kind of projects do you need done the most? Or rather, what about your house drives you the craziest?

How long you plan to remain in the house is perhaps the most important of those questions.  The less time you expect to spend there, the less time you have to spend enjoying the fruits of your hard work.  It also means tht you are going to need to have some money left over when the time comes to move.  In such a case, you are going to want to focus on the projects that five you the biggest Return on Investment (ROI).  For example, simple and relatively inexpensive things like replacing old doors and windows can have a return of 100% or more in the right market.  A major remodel of a kitchen or basement will generally bring less than a 100% ROI.

This is just one of the many valuable insights provided in my newly published book "Home Improvements that Improve Values." For a free copy, sent to you without cost or obligation click on the picture of the book